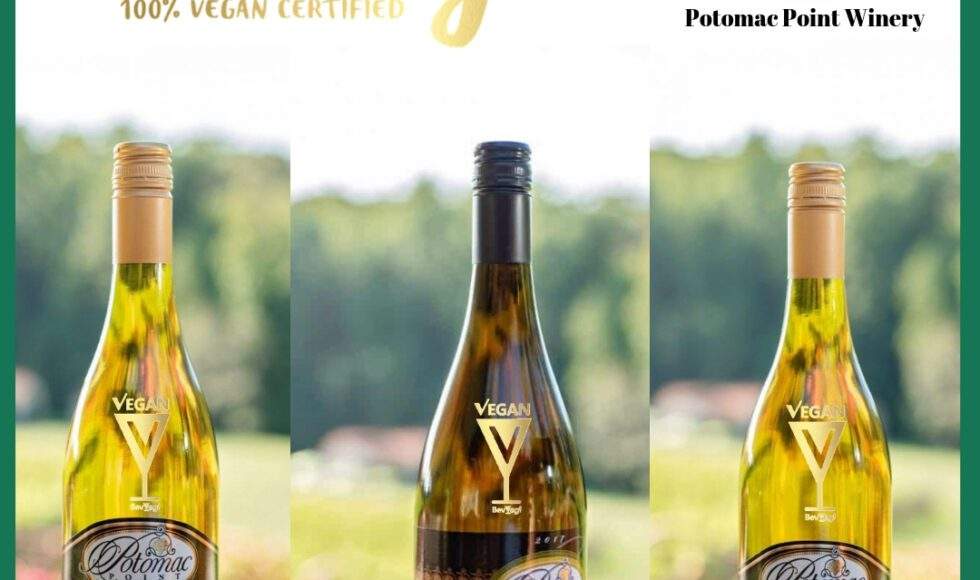 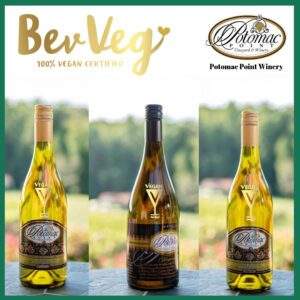 Stafford, VA (April 17, 2019) – Potomac Point Winery, located in Northern Virginia, now offers award-winning wine blends certified vegan by BeVeg International. Potomac Point joins the ranks of wineries across the globe who are catering to the vegan consumer by using plant-based fining practices and ingredients. Many wineries filter their wines through animal parts or have ingredients that use animal byproducts. Since alcohol rarely has disclosures on the bottle, the consumer rarely knows exactly what they are actually drinking. After an extensive review of its production practices and ingredients, Potomac Point passed the BeVeg vegan certification process for the Richland Reserve Viognier SL 2017, Chardonnay 2016, and Petit Manseng 2017.

According to Carissa Kranz, founder and CEO of BeVeg International, the company’s certification seal is “a stamp of approval” that tells vegans and others who care about sustainability and social responsibility that a wine label that carries its trademark meets the strictest standards of vegan compliance.

Potomac Point owners Skip and Cindy Causey explain that the winery and vineyard was born out of “dream talks” following a visit to Napa Valley in the early 90’s. The dream was to create vintage blends inspired by the Mediterranean culture. Now, with third-generation Spanish winemaker heading their team, Potomac Point is taking great strides to be the leading vineyard on the East Coast. As Potomac Point’s winemaker, David Pagan Castaño explained, the goal is for the Virginia grape to become a leading competitor that dethrones California as “king of American wine production”. To do so, “Potomac Point has eliminated additives and animal derivatives in its winemaking,” says Pagan Castaño.

Around the world, conscious companies are starting to embrace these higher standards of production and want independent verification from BeVeg International, a law firm for global vegan certification. BeVeg International certified Potomac Point’s production practices as vegan-friendly after reviewing the entire vineyard’s winemaking process. Potomac Point, a family-grown and managed vineyard, is a family-owned winery in Northern Virginia known for its conscious winemaking practices. The cutting-edge technology and eco-friendly processes increase its exposure among the growing vegan community for the Metro DC and Northern Virginia area. Since opening the doors to their Mediterranean style vineyard, Potomac Point has been a premier winery producing award-winning wines each year. The portfolio of wines has earned Potomac Point titles such as ‘Best of Class’ and ‘Best of Red’ in the International Eastern Wine Competition and most recently earned gold and silver medals in the Virginia Wine 2019 Governor’s Cup and San Francisco International Wine Competition. Notably, the now-certified vegan Petit Manseng 2017 blend was a silver winner at the 2018 Savor Virginia Wine Classic. Potomac Point also features such as an exclusive wine club and premier wedding venue location. For more information visit www.PotomacPointWinery.com.

BeVeg is the only law firm in the world that specializes in vegan certification, regulation, and advocacy. The firm exists to raise the standard for consumer transparency by requiring companies who apply to disclose all ingredients and processes to packaging. Kranz states, “it’s about being forthcoming.” BeVeg demands honest information and only licenses use of its logo to conscious companies in alignment with the BeVeg vegan standard. BeVeg is featured as the GOLD STANDARD for vegan certification in Forbes, California Winery Advisor, PETA, CBS, NBC, Social Life Magazine, LiveKindly, and the Minnesota Growler, to name a few.  In addition, BeVeg was endorsed by celebrity supermodel, Christie Brinkley.

BeVeg attorneys possess a commitment to strict vegan standards. No other certification company is owned, operated, and managed as a law firm and by a team of attorneys. Dedicated attorneys research and draft custom applications and require rigorous disclosures and representations by prospective licensees to ensure that the BevVeg Vegan Standard maintains its integrity. BeVeg is the standard of compliance and use of the logo is considered the premier stamp of approval for those looking for the greenest plant-based options.