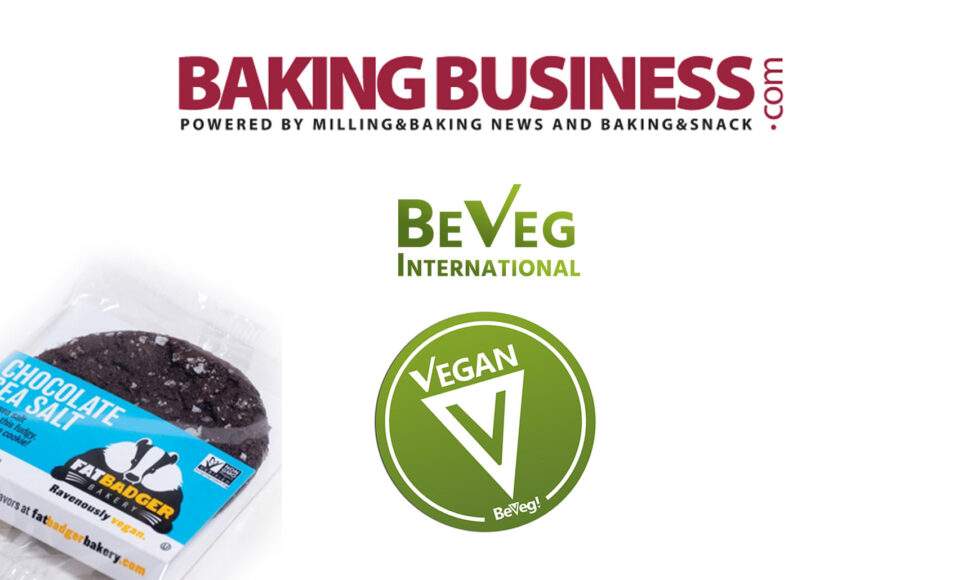 With so many no’s at the forefront of vegan formulating — no eggs, no butter, no honey, no dairy — formulation is all about trial and error. Bakers not only have to replace great taste and texture but also the functionality that contributes to that texture, mouthfeel and shelf life.

Lauren Chew, founder of the San Francisco-based company now known as Love + Chew Brands, has a few tricks for making vegan gluten-free cookies. She uses chia seeds, for example, to keep the cookies soft and moist.

“We hydrate the chia seeds for about 10 minutes, creating a gel-like consistency,” Ms. Chew said. “It’s both science and art because you do not want to under hydrate or overdo it.”

This mixture is then blended into the batter before adding xanthan gum and vinegar to lower water activity for food safety and shelf life. Date paste then naturally sweetens the cookies and helps hold all the ingredients together.

Fat Badger Bakery, Pipersville, Pa., started out making dairy-free cookies because of allergy concerns. The company went completely vegan in 2018, eliminating the eggs and honey that were staples in many of its all-natural, small-batch recipes.

“This was more challenging in some varieties than others,” said Gretchen Dossa, general manager. “We had to work on the spread and mouthfeel. There were a lot of bad cookies.”

The company’s goal was to bake “really good cookies,” not just “good vegan cookies.” Through mindful ingredient selection, Ms. Dossa said they have achieved it.

Recipes use Earth Balance vegan buttery spread, a brand of Conagra Brands Inc., Chicago. The butter replacement is based on palm fruit, canola and olive oils, sunflower lecithin, lactic acid and annatto extract, a combination that functions like butter with a dairy taste and rich appearance.

Premium flavorful ingredients also help the brand stand out. The natural flavors, for example, are purified extracts from spices, fruits and vegetables. The sweet raspberry variety is a vanilla sugar cookie amplified with the house-made raspberry topping.

Toppings are the star at Cinnaholic bakeries across the country. Founded by Florian and Shannon Radke, a husband-and-wife team who opened their store in Berkeley, Calif., in 2010, Cinnaholic is all about custom gourmet cinnamon rolls. The vegan positioning is a side note.

“We make a soy-based frosting in each store and then flavor it with natural ingredients,” said LeAnne Cavallaro, director of operations.

Cinnaholic is a franchise business spread across the country, so it works with multiple vendors, all of whom must be approved to supply vegan ingredients.

The one ingredient that all stores purchase from the same vendor is the mini marshmallow topping. Dandies Marshmallows from Chicago Vegan Foods are made with tapioca, cane sugar, carrageenan and soy protein. The plant-based marshmallows are Non-GMO Project Verified and kosher, something traditional marshmallows cannot achieve when they are made with gelatin.

Ashtin Martinez, who bakes vegan cakes for The University Club of Milwaukee Country Clubs and Celesta Restaurant, as well as caters to the greater Milwaukee area, also purchases Dandies Marshmallows. But one surprising topping she makes herself is sprinkles.

Traditional sprinkles typically include a wax ingredient from either plants or bees, with the latter disqualifying them from being vegan. To achieve shelf stability, either artificial red dye or cochineal extract, which is derived from insects and not vegan, is used. By making the sprinkles herself, knowing she will use them in the near future, Ms. Martinez is able to work with plant-based red colors.

Vegan cakes are her specialty, and she does not let traditional recipes stop her from recreating a vegan version. This includes buttercream-type fillings and cream cheese-flavored frostings. The best approach to “veganizing” a recipe is not to reformulate it, but rather determine what that ingredient does for the cake and then figure out a way to replicate it, according to Ms. Martinez.

“In trying to resolve too many challenges at once, formulators might overcomplicate the recipe and create more difficulties to overcome,” she said.

To simplify the process, Dawn Foods supplies vegan baking mixes, including crème cakes, donuts, muffins and cookies, as well as fillings, icings and glazes. When prepared according to label directions, the finished treat may be labeled as vegan.

Carissa Kranz, attorney, founder and chief executive officer, BeVeg International, a vegan certification firm, cautions about hidden sources of animal products. Sugar, for example, may have bone char. Milk derivatives are disguised with names such as casein and lactose. These animal ingredients may even be used as carriers for other ingredients, such as flavors and colors.

This article is an excerpt from the March 2021 issue of Baking & Snack. To read the entire feature on vegan formulation, click here.