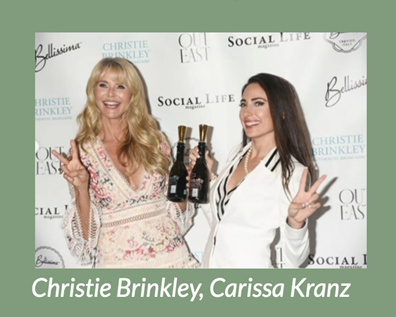 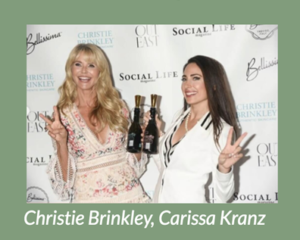 Christie, a vegetarian herself, believes that beauty comes from within, and that’s why she cares about what is in her wines. It should come as no surprise that the supermodel, philanthropist, and forever optimist, is dedicated to making certain her wine is certified vegan, and therefore, just as Bellissima, from the inside out, as she is.

How? By ensuring the ingredients and processes used are completely vegan, and do not contain and are not filtered through any animal parts.

Oftentimes, wines are fined and clarified by filtering through animal parts (like fish bladder, gelatin: cow’s elbows and knees, horse hooves, pigs feet, egg whites, fish skeletons, etc.) or have ingredients that use animal byproducts, like sugar made with bone char. Since alcohol has no required ingredient and process disclosures, the consumer rarely knows what they are consuming, and most are surprised to learn there are 66 plus ingredients that can be added to their alcoholic beverage.

After a thorough review of its production practices and ingredients, and gathering extensive information from the Italian Vineyard, BeVeg International welcomed Bellissima into the global BeVeg certified vegan network of conscious companies interested in appealing to conscious consumers. BeVeg International found that Bellissima does not add any unnecessary ingredients that would compromise the quality of the grapes or the integrity of the BeVeg vegan claim.

Founder and CEO of BeVeg International, Carissa Kranz, an attorney herself, says the BeVeg vegan certification seal is “a stamp of approval” that tells vegans and others who care about sustainability and social responsibility that a label that carries its trademark meets the highest standards of vegan compliance.

Around the world, conscious companies embrace these higher standards of production and are seeking independent verification from BeVeg International, the only law firm in the world for global vegan certification, with the only attorney-issued vegan symbol. BeVeg brings credibility and accountability to vegan claims that never existed before. Kranz states, “it’s about being forthcoming with information, ingredients, processes, facilities, and the like.” BeVeg demands honest information and licenses its vegan logo with integrity to conscious companies in alignment with the BeVeg vegan certification standard.

“Beauty is in the eye of the beholder,” says Christie. Seeing the BeVeg vegan symbol means you can trust you are consuming a beautiful, bellissima product without any hidden animal residue or additives.

Bellissima bottles are now dressed with the BeVeg vegan wine glass symbol, and can be found in grocery stores, liquor stores, and restaurants internationally. Bellissima, is also listed in the BeVeg vegan database, a FREE consumer app, called the “Ultimate Alcohol Guide” by Livekindly magazine, available in app stores.