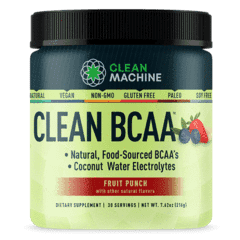 The BeVeg trademark is the only vegan symbol issued by a global law
firm.

That’s not all, though. The Clean BCAA Fruit Punch comes in two forms:

A flavored version (taken before and during workouts to help reduce muscle breakdown, promotes fat loss, and minimizes calorie intake).

Whether you’re gluten-free, soy-free, or both, Clean Machine has you covered. Their product is gluten and soy-free plus it’s made from 100% fermented non-GMO corn, instead of duck feathers or human hair like other BCAA’s.

Right now, anyone can claim to be vegan, but the question is, by what standard? The word “vegan” is not regulated by any government entity or law, and so, BeVeg, as a law firm, exists to raise the standard for consumer transparency by requiring companies who apply to disclose all ingredients
and packaging processes to attorneys, to keep their vegan claims honest and accountable. The BevVeg vegan symbol is licensed by attorneys to conscious companies in alignment with the BevVeg vegan standard, as outlined on www.beveg.com

“BevVeg is here to pioneer a path forward by making vegan certification literally a practice area since lawyers by nature are regulators.” says Kranz.

Vegan certified Clean BCAA Fruit Punch with the BevVeg vegan symbol can be shipped all over the world, allowing you to uphold your vegan standards while raising your nutrient intake. Clean BCAA Fruit Punch, now certified vegan by BevVeg, has also been listed in the BevVeg vegan database; a FREE consumer app, with more than 1 million listed products.