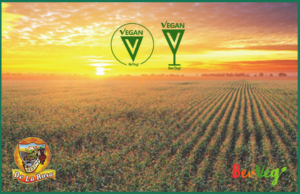 Vegan claims are not regulated by any government entity, and therefore such claims lack credibility, unless verified by an authority, like BevVeg International, who literally defined a global vegan standard, now represented in more than 70 countries. BevVeg then gives the right to use its internationally protected vegan trademark symbol to products and companies who exist and operate in alignment with the defined BevVeg vegan standard.

De la Rosa specializes in food and wine, and prides itself on transparency as indicated by their many certifications. De la Rosa products are not only certified vegan by BevVeg, but they are also certified non-GMO, organic, and kosher.

Around the world, conscious companies are embracing higher standards of transparency and responding to conscious consumerism by seeking independent vegan verification from BevVeg International, the only law firm in the world to certify vegan and issue a trademark vegan logo. “BevVeg is here to pioneer a path forward by making vegan certification literally a law firm practice area, since lawyers by nature are regulators,” says Kranz.

De la Rosa products can be found at a variety of grocery stores and chains, such as kosher wines, ebay, Fairway, Shoprite, and on their website www.delarosa613.com.