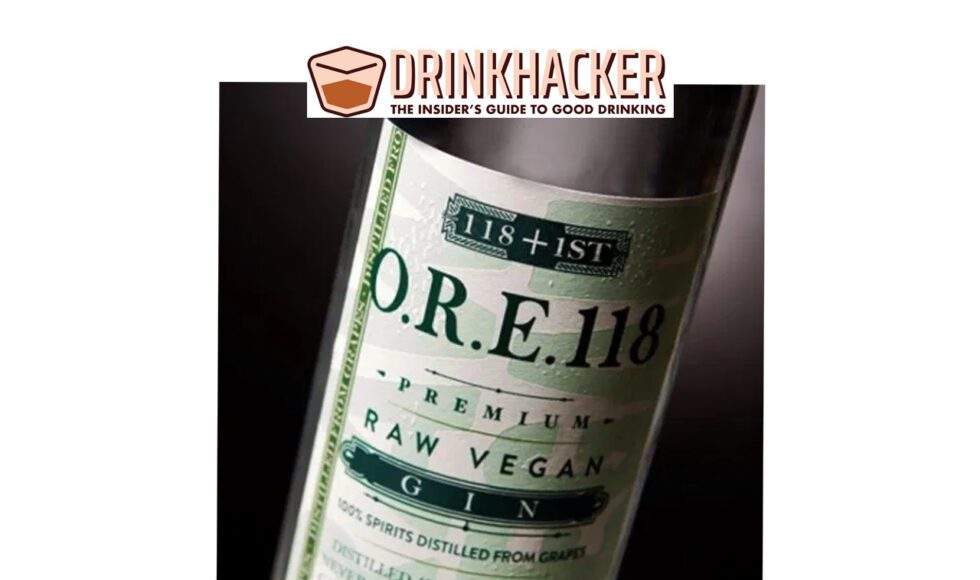 Is gin usually not vegan? Not raw? I’m not aware of many distilleries using animal by-products in their production process (perhaps with the exception of gelatin and maybe honey), but I suppose it’s possible. If veganism is your bag, you probably want to know that your gin is free from animal involvement. As for the “raw” claims, well, I’ll let O.R.E. (“Original Raw Essence”), a Chardonnay grape-distilled gin made in New York and bottled in Alameda, California, do some of the explaining:

BevVeg certified O.R.E. 118 Gin’s production practices as vegan-friendly, after reviewing all ingredients and its manufacturing process in depth. This genre-defining spirit is the creation of founder Robert Elder and is the world’s first raw vegan gin label to be approved by the TTB. While dining at a raw vegan restaurant in Manhattan he requested a gin martini. Dismayed to discover that martinis were not served because there were no spirits that were both raw and vegan, he undertook to change that and established his family-run company, 118 + 1st, to produce hand-crafted, raw spirits. The name of Elder’s inaugural product, O.R.E. 118 Gin, has a double meaning: O.R.E. stands for “Original Raw Essence,” and the letters are also his father’s initials.

So you know the origin of O.R.E. What about the 118? That’s the maximum production temperature of this gin, which is made possible by a vacuum distillation process. “The gin is ‘raw’ because throughout its entire fermentation and distillation process it is kept below 118 degrees Fahrenheit, the temperature above which many enzymes break down and foods and beverages are no longer considered raw.” Some additional notes:

O.R.E. 118 Gin uses a unique production method to create the product. Chardonnay grapes are the base material, which are then fermented and distilled multiple times under vacuum to create an eau-de-vie. Vacuum distillation is used to keep the temperature below 118 degrees Fahrenheit, whereas traditional methods of distillation take place at temperatures of 174 degrees Fahrenheit and above. A mixture of organic botanicals is then macerated in the eau-de-vie for 24 hours prior to the final distillation. Because this gin never reaches a temperature above 118 degrees Fahrenheit, the “Original Raw Essence” and delicious flavors of the fruit and botanicals are retained.

By way of botanicals, the grape eau-de-vie is infused with Italian juniper berries, black sesame seeds, green peppercorns, Kaffir lime leaves, ginger root, and orris root. And with all of that out of the way, let’s taste the thing.

The nose is instantly a bit unusual for gin, its ginger notes taking a firm, aromatic lead. A significant earthiness underlies that, driven more by the leathery orris than the piney juniper. The palate is quite a bit sweeter than expected, with heavy fruity notes from the lime leaf influence leading the way. I’m reminded a lot of Thai spices, somewhat sultry, almost curried, but heavy with green herbs and, again, plenty of lime. Oddly, on the finish, blueberry notes are evident, along with a light squeeze of citrus.

I can’t much comment on the virtues of a “raw” or vegan spirit, but if you’re looking for a unique gin — with a story behind it — O.R.E. 118 fits the bill.

This article originally appeared on Drinkhacker. Drinkhacker receives over 95k UMV, and is a blog geared to affluent individuals interested in the latest beverages. It is devoted to covering the latest cocktails, spirits, wine and beer, offering original recipes and in-depth reviews of new beverage products. It covers all price ranges of products and specializes in luxury and ultrapremium brands and upmarket events.