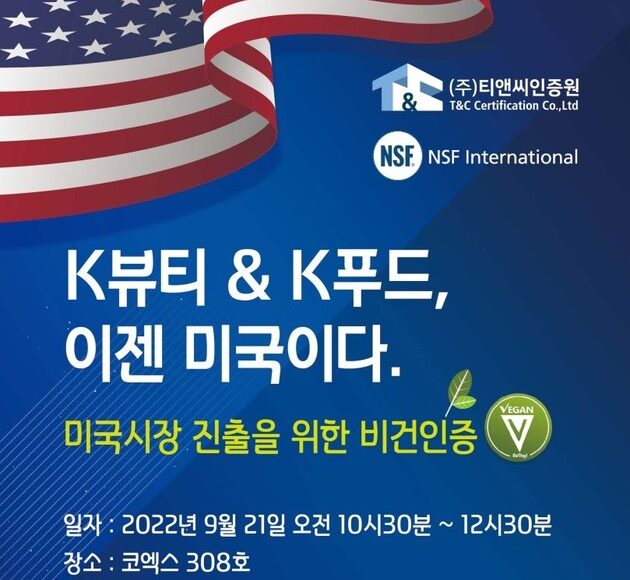 The era of vegetarianism, which goes beyond a vegetarian diet by eating plants or fruits, has begun, where skin care and adornment are made with plant ingredients. Veganism, which started in Europe and America, is an expanding movement to protect animal rights. Veganism has established itself as a trend that affects not only food, but also cosmetics, fashion, and household items, as well as overall life.

In the US, the craze for vegan cosmetics is strong. ‘Eco-friendly’, ‘sustainability’, ‘carbon neutrality’ and ‘plant-based’ have emerged as representative keywords in the US beauty market. This is why domestic companies that are about to export to the United States should pay attention to vegan certification.

The BeVeg system, a representative vegan certification used in the US and global markets, will be implemented for the first time in Korea.

BeVeg, a US vegan certification, is applied not only to cosmetics, but also to foods, health functional foods, and pharmaceuticals. BeVeg is provided from finished cosmetic products to processes and services. It is an international standard that guarantees the vegan conformity of products and manufacturing processes. Cosmetic brand companies, raw material companies, manufacturing plants, subdivision companies, and distributors can acquire BeVeg certification, and can benefit as it is expected for vegan cosmetics market to rise globally.

NSF International is a strategy to broaden the way for domestic cosmetics companies to export to the US by introducing BeVeg, a credible US vegan certification.

TNC Certification Institute, a cosmetics and food consulting agency, is in charge of marketing and consulting for BeVeg Vegan certification in cooperation with NSF International.

Hong Young-bae, CEO of TNC Certification Institute, said, “K-beauty and K-food are popular amid the K-culture craze. Consumer interest in vegan certification has also increased in line with the trend of value consumption. “He said.

An NSF International official said, “NSF is an American institution that develops and enacts US national and international standards. It provides organic, Non-GMO, and gluten-free certifications from the US Department of Agriculture. Inspects and reviews the safety and quality of food and water, etc. I have a role to play,” he said.

He emphasized, “BeVeg Vegan certification is highly reliable in the global market, including the US. Products with the BeVeg vegan certification logo can gain public confidence from consumers around the world.”

Original article posted in Korean on the rise of the Vegan cosmetic market here.