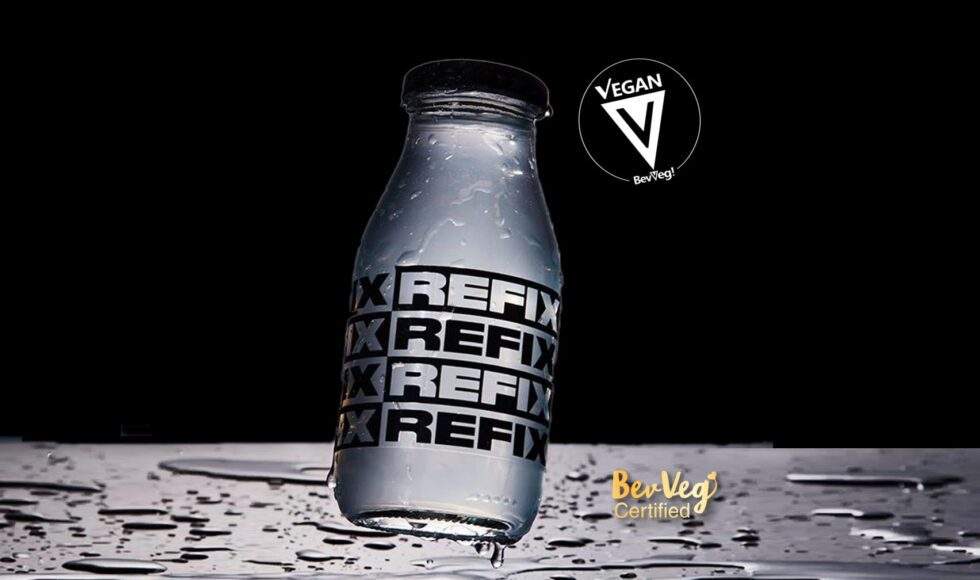 REFIX is a refreshing innovation recovery drink made with seawater taken from the Atlantic Ocean on Costa da Morte, Galicia, Spain. The vegan certified energy drink is extracted strategically from the protected area by the Natura 2000 network, 70 meters from the shoreline at a depth of 4 meters, where the quality of the water is higher than at any other point on the European coastline.

Why seawater? Seawater contains the same mineral salts as that of the human body, and in similar proportion: sodium, potassium, magnesium, calcium, silicon, iodine, manganese, etc., and up to 78 different electrolytes. While seawater, mineral water, and lemon are the main components of REFIX, there are other natural vegan components added to make this beverage one of the healthiest, most beneficial, magnesium filled alkaline beverages on the market. Each bottle is sustainably packaged with glass, and contains only 3.5 calories, all in perfectly balanced concentration for optimum human health.

REFIX is full of mineral salts. No synthetic sales. No preservatives. No colorants. No sugar. Vegan Certified by BeVeg, these natural flavors mixed with the innovative ingredient of strategically sourced seawater comes from the depths of the ocean off the coast of Spain.

“REFIX chose to have the BevVeg global vegan trademark on both its bottles and boxes to show off its sustainable product and packaging. In view of the lack of choices in the market, REFIX is proud to be certified vegan with BeVeg and given access to the BevVeg vegan certified logo by BeVeg,” says Anta. “we assure that apart from our drink, the glue on our cardboard boxes also does not have any animal components.” add Anta.

You can currently find this newly certified vegan beverage on Amazon.com, or on refixyourself.us. The beverage is also offered in different local stores across the United States, as well as in other countries like Spain, Switzerland, Slovenia, etc.

“We believe that vegan and non-vegan people identify with the BeVeg vegan logo as a guarantee of the highest and purest quality of ingredients. BeVeg as a vegan certifying organization increases the value of our product and furthers our joint mission of truth in labeling laws and advocacy for a sustainable planet. We have noticed that thanks to the BeVeg vegan logo, consumers who demand sustainable products have become more interested in our product when they see that we use glass bottles, aluminum caps, recycled boxes, and have the most recognized vegan symbol in the world that is now also an accredited vegan certification symbol as recognized by international conformity standards,” says Anta.

This article was originally Posted on Jane Unchained News

REFIX at the Laws THAT Matter with Carissa Kranz, BeVeg CEO.