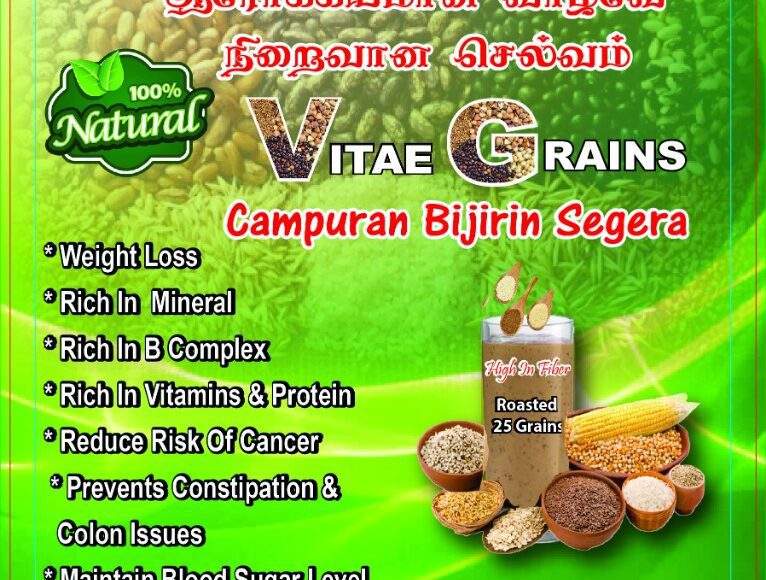 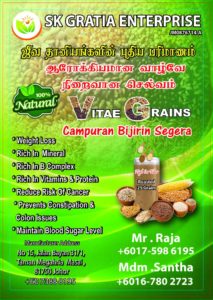 Vitae Grains from SK Gratia Enterprise is now on the map for being officially vegan certified. Companies around the world realize vegan claims lack credibility without third party verification, and are seeking approval from vegan certification firms. Sk Gratia Enterprise understands the growing vegan market and the need to market openly and honestly to the vegan consumer.
After an extensive review of their production practices, and ingredients, Sk Global Enterprises passed the detailed BeVeg vegan certification process for their vitae grains.

The remarkable effort of two individuals, Santa, a single mother and her business partner Mr. Vinayagan has transformed into an entrepreneurial track that has dramatically impacted the health of the Malaysian people today.
Santa’s 27-year-old daughter first consumed this distinctive grain to try and heal her asthma. Her improvement is the riding force behind Santa’s belief that there was more to the vitae grains than she ever imagined. Vitae grains have been associated with different health benefits such as controlled blood glucose, reduced cholesterol, fighting depression, boosting immunity, supporting digestion, etc.

A global law group for vegan certification to bring credibility to an area of law that is deficient and undefined. Right now, anyone can claim vegan, but the question is, by what standard?

The word “vegan” is not regulated by any government entity or law, and so, BeVeg, as a law firm exists to raise the standard for consumer transparency, by requiring companies who apply to disclose all ingredients and processes to attorneys to keep their vegan claims honest and accountable. The BeVeg vegan symbol is licensed by attorneys to conscious companies in alignment with the BeVeg Vegan standard, as outlined on
https://www.beveg.com
According to Carissa Kranz, attorney founder and CEO of BeVeg International, vitae grains will be placing the BeVeg vegan symbol on all product packaging and on their website. The BeVeg vegan logo tells those who care about sustainability, social responsibility, and our planet that any product that carries its vegan logo trademark has been investigated and deemed to meet the BeVeg vegan standard.

Around the world, conscious companies are embracing higher standards of production practices and are seeking independent vegan verification from BeVeg International, the only law firm in the world, to certify vegan and issue a trademark vegan logo backed by lawyers. The firm exists to raise the standard for consumer transparency by requiring companies who apply to disclose all ingredients and processes to packaging, something the law does not currently require in order to make a vegan claim.

Kranz states, “It’s about being forthcoming.” BeVeg demands honest information and only licenses use of its logo to conscious companies in alignment with the BeVeg vegan standard. BeVeg is featured as the GOLD STANDARD for vegan certification in Forbes, California Winery Advisor, PETA, CBS, NBC, Social Life Magazine, LiveKindly, and the Minnesota Growler, to name a few. In addition, BeVeg was
recently endorsed by celebrity supermodel, Christie Brinkley.