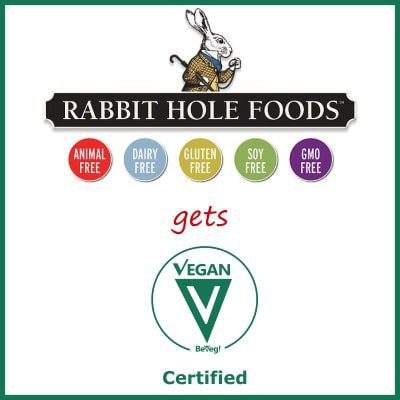 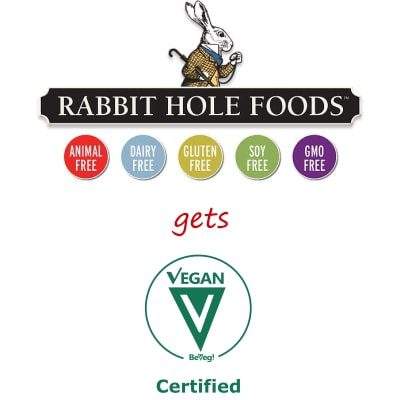 The only vegan symbol issued by a law firm

Los Angeles, California (January 2019) – Rabbit Hole Foods passed the meticulous BeVeg Vegan Certification process and have now earned the right to use the BeVeg vegan certified symbol on their products. Anyone who tastes these products, vegan or not, will surely realize they are in fact in Wonderland! Vegans will go mad hatter over these products and non-vegans will definitely think they fell down the rabbit hole when they taste these meat and dairy alternative products: Spinachoke Dip, Un-Crab Seaside Salad, Un-Egg Salad, Un-Chicken Curry Salad, Un-Tuna Salad.

Rabbit Hole Foods products joins many other delicious vegan BeVeg certified brands across the globe who are appealing to the vegan consumer by proving up their vegan claims of using cruelty-free, plant-based ingredients only. As the consumer gains awareness that vegan claims are not held accountable if not certified, companies realize the importance of BeVeg verified vegan claims. Around the world, conscious companies are embracing higher standards of production practices and are seeking independent vegan verification from BeVeg International, the only law firm in the world to certify vegan and issue a trademark vegan logo backed by lawyers.

According to Carissa Kranz, founder and CEO of BeVeg International, Rabbit Hole Foods is a prime example of a company who worked in the spirit of full transparency by disclosing their trade secrets to us, knowing they are protected by our attorney-client privilege, and indeed did pass the entire proceed for all their ingredients, source ingredients, suppliers, and processes. The BeVeg vegan certified symbol is already being printed on all product packaging and placed on their website. Such action let’s those who care about sustainability, social responsibility, and our planet that the products carrying the BeVeg vegan trademark meet the standards of vegan compliance as set out and reviewed by BeVeg attorneys; a firm that is truly defining an international vegan standard.

Rabbit Hole Foods is fully vegan in its practices and ingredients used. Owner Rosanna Caira believes in full transparency for the vegan consumer, and even the non-vegan consumer who wishes to dabble into alternative plant-based products that do not trade on flavor. They specialize in delicious plant based foods, and pride themselves on transparency as indicated by their many claims, offering organic, Non-GMO, soy free, dairy free, gluten free, and now certified animal free products to its consumers.

BeVeg is the only law firm in the world that specializes in vegan certification. The firm exists to raise the standard for consumer transparency by requiring companies who apply to disclose all ingredients and processes to packaging, something the law does not currently require in order to make a vegan claim. Kranz states, “true honesty is about offering up information, which goes a step further than just turning over what’s asked of you.” BeVeg demands honest information. No other vegan certification symbol is issued by a law firm.

For information about the vegan alcohol certification program, visit www.beveg.com, and there you can also download the BevVeg free consumer app, which is also below for ease of reference: