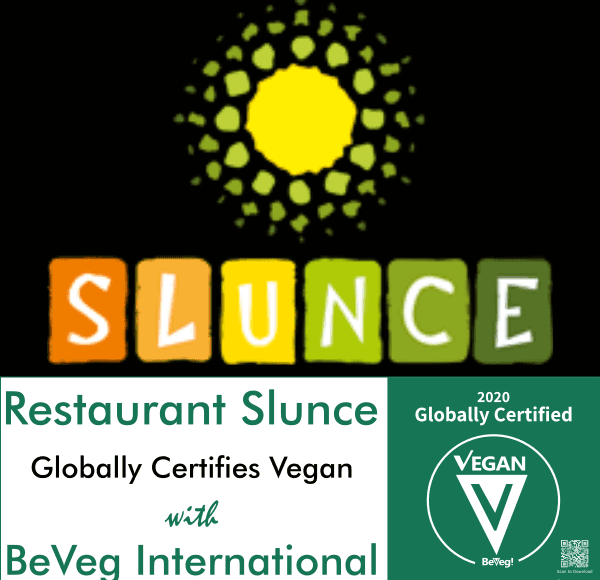 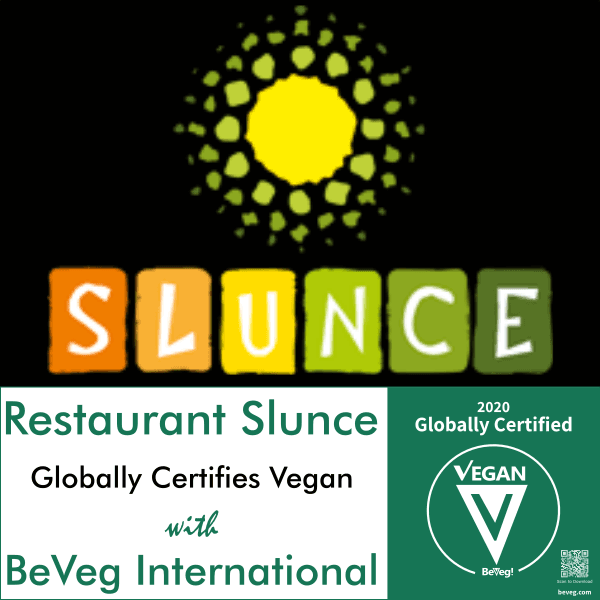 České Budějovice, Czech Republic ( March 28 2020 ) – Restaurant Slunce officially joins the global BeVeg vegan certification network, along with many other companies across the globe from the UK, USA, Latin America, Asia, Australia, and so on.
BeVeg international is a vegan certification firm with standards managed by lawyers. As the only law firm in the world to specialize in vegan certification, regulation, and advocacy, BeVeg is paving a path forward for veganism that is clearly defined and trusted.
While BeVeg focuses on vegan product certification, the restaurant vegan certification process is a service for the consumer who is searching for vegan only establishments, rather than places with just vegan friendly options. That means a vegetarian restaurant with vegan options will not be considered for BeVeg vegan restaurant certification. That also means a restaurant with a shared kitchen, which chances cross-contamination will also not be considered.
The purpose behind the global vegan network and free consumer restaurant app is to encourage vegans to patronize other vegan establishments to drive a vegan economy, which will ultimately drive the kind of change vegans wish to see in the world.
For more information about this delicious vegan BeVeg vegan certified restaurant, check out their website: http://restaurantslunce.cz/
BeVeg exists to raise the standard for consumer transparency and is on a shared mission to make this world more compassionate and kind through legal advocacy and analysis. BeVeg demands honest information and only licenses use of its logo to conscious companies in alignment with the set out BeVeg vegan standards, as outlined at www.beveg.com.
BeVeg continues to be mentioned as the GOLD STANDARD for vegan certification in well-known news outlets like Forbes, California Winery Advisor, PETA, CBS, NBC, Social Life Magazine, LiveKindly, and the Minnesota Growler, VegNews, to name a few. In addition, BeVeg is used by celebrity supermodel, Christie Brinkley, and vegan icon from What The Health documentary, Kip Anderson.
For more information about BeVeg International vegan certification and its free consumer app, visit www.beveg.com
Press Contact: info@bevveg.com | (202) 996-7999