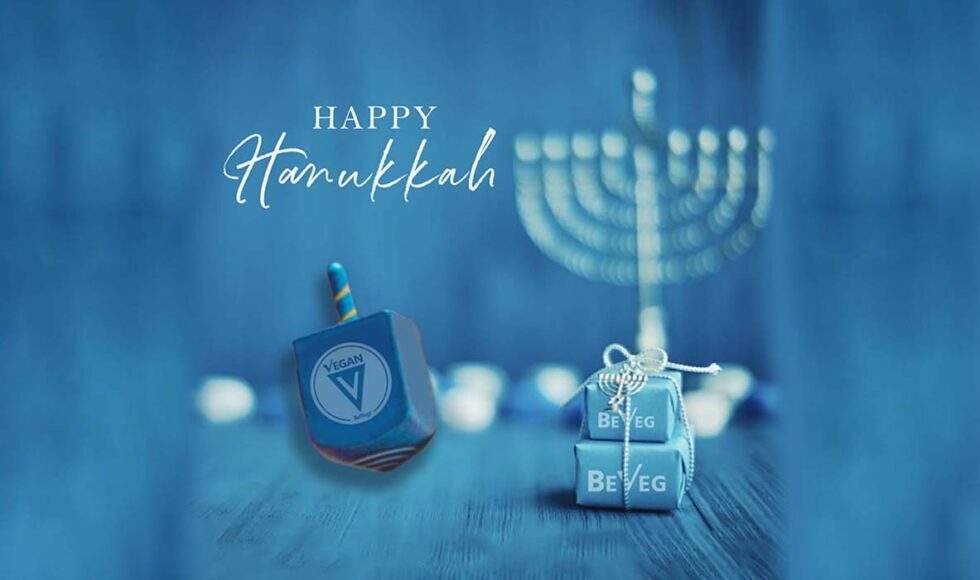 BeVeg and Jane Unchained wishes everyone a very Happy Hanukkah. Check out these cruelty-free recipes that incorporate certified vegan ingredients.

Vegan Latkes by the Edgy Veg.

This vegan latkes recipe uses the liquid from a can of chickpeas along with flour and baking powder. These crispy fried latkes will taste just like the original recipe, but egg-free. Get the full recipe here. Traditional noodle kugel is far from vegan—featuring a mixture of cottage cheese, sour cream, butter, and eggs. But World of vegan has this vegan noodle kugel recipe. Get it here. This traditional bread is served at Jewish ceremonial occasions such as Shabbat and other holidays. It is shared and enjoyed by many people worldwide. Typically, the bread is made with eggs and honey. Edgy Veg  vegan challah recipe, uses aquafaba and white sugar to recreate the texture and sweetness of traditional Israeli water challah bread! Get the recipe here! Hummus and Pita are a classic but why not to include them on this holidays specially if they are so easy to make. Check this amazing video recipe by Sweet Simple Vegan here. Commonly consumed during Passover, this soup is also a perfect vegan Hanukkah recipe. Get the recipe here. Perfect for brunch or the holiday table, the simple but classic comfort-food dish known as noodle kugel has as many sweet and savoury variations as there are family traditions and ways to say “happy holidays.” Check the recipe here. Gefilte ‘Fish’ by One Green Planet.

Get this delicious “fish” made with chickpeas and sauteed vegetables, the texture is spot on and they taste like a much yummier version of the original “treat.” Get the recipe here. Sufganiyot by The Beet.

These traditional donuts are usually made with butter and eggs, but the Beet made them over to be vegan and dairy-free! Video recipe here. This moist and delicious Vegan Apple Cake tastes like fall and is just as easy to make as a box cake mix. Check the recipe here. These holidays don’t forget to shop for ethically made products without harming our environment, animals and our planet. One way to do it is by looking for vegan certified brands and ingredients.

Wishing a very Happy Vegannukah from all of us at BeVeg, the Global Leader in Vegan Certification.