Palm Beach Post: Feature Story on Cover and in Accent (2015) 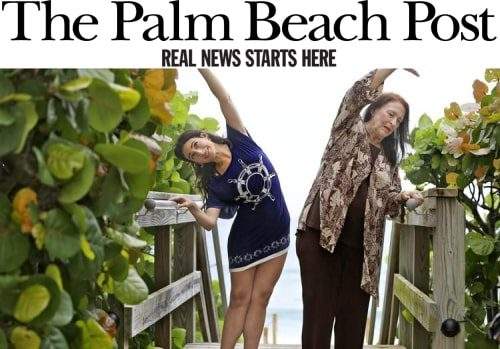 Palm Beach Post: Feature Story on Cover and in Accent (2015)

A local ballet teacher slips into the darkness of Alzheimer’s

“Are you ready to go for a walk, Miss Joan?”

Carissa Kranz holds out her hand and a woman in stretchy brown pants and slippers takes it.

Together they ride the elevator down to the pool deck. They shuffle slowly toward the beach.

The frail woman is bent forward, staring blankly at the ground, her tiny steps shambling and shaky, her mouth slack. Carissa walks with a dancer’s turnout.

They reach the wooden beach steps, lined with a metal railing, about the same diameter and height as a ballet bar.

Kranz asks, “What do you think, Miss Joan? Shall we do some barre stretches?”

A look of recognition animates the woman’s face.

She straightens and raises a graceful arm with a ballerina’s articulated fingers as she bends to the side in a classic ballet posture.

For a moment, Miss Joan Miller is back.

For a moment, the old roles of teacher and student are restored.

Then, the complications of the present rush back.

Kranz, a 31-year-old attorney, has become the guardian of her destitute 74-year-old former ballet teacher who is slipping, day by day, further into the quicksand of Alzheimer’s.

A year ago, she rescued her mentor from a nursing home and moved her into her oceanfront Jupiter condo.

“I always felt I disappointed her once,” said Kranz. “I couldn’t do it again.”

‘Miss Joan’ did it all

Growing up, Kranz had been a star pupil at Palm Beach Ballet Center in Lake Park, where Joan Miller reigned as the grande dame of the local dance world for more than half a century.

In a black bouffant and operatic swoops of winged eyeliner, Miller was a presiding diva, who was tough and uncompromising in her single-minded dedication to ballet.

In 2010, Dance Magazine of Florida called her “a Florida dance icon.”

Her students’ performances were extravaganzas. Her costumes and sets were New York quality.

“Miss Joan did it all,” said Kranz. “Lighting, costumes, choreography, everything.”

Students and former teachers remember Miss Joan sewing costumes until 4 or 5 a.m. before performances, sometimes sleeping at the studio. When a show required boys, always in short supply in ballet, Kranz recalls Miller going to the local Publix and promising bag boys $100 if they’d pull on a pair of tights and walk onstage.

“People came from all over to train with her,” said Penny Greenly, a student of Miller’s in the 1970s. The women opened Southern Dance in Boynton Beach together in 1982, before Greenly became sole owner. “Her legacy is everywhere. Most of the dance studios and school dance programs in Palm Beach County were touched in some way by her. She was their foundation.”

The “wall of fame” in her studio testified to Miller’s teaching skill. She had students go on to the world’s top ballet schools and companies: the Bolshoi, American Ballet Theatre, Miami City Ballet, Joffrey Ballet and the Martha Graham and Alvin Ailey companies. Others became musical theater stars on Broadway, attended Juilliard, performed in Disney productions.

“You could be one of my stars,” she told Kranz, who in high school danced lead roles in Miller’s stagings of “Bolero,” “Stars and Stripes,” “Graduation Ball,” “A Christmas Carol,” “Snow White” and “The Wizard of Oz.”

But dancers’ careers are short, prone to injury and usually poorly-paid.

College seemed a more practical option for the 2002 Dreyfoos School of the Arts graduate, the recipient of 11 years of free dance lessons from Miller because her divorced, ballet teacher mother couldn’t afford them.

Miller gave free classes to dozens of her most talented students who couldn’t pay tuition. When her best students were accepted into New York “summer intensive” classes they couldn’t afford, Miller often paid their fees.

“When my family couldn’t afford the cost of my dance training, Ms. Joan insisted they continue to bring me,” wrote Jessica Patty, a former Miller student who appeared in Broadway revivals of “A Chorus Line” and “Evita.”

Patty wrote in an email, “She did that for so many students that she basically had no money to support herself and the studio was in a constant state of financial turmoil. Miss Joan was tough as nails but her dedication … taught me valuable life lessons that stretch far beyond a successful career.”

‘What Carissa is doing is so admirable’

For Miller, the only yardstick for success was dance.

Kranz knew her mentor was crushed when she enrolled in the University of Florida instead of going on auditions, especially after years of free lessons.

Kranz went on to earn a law degree from Berkeley, where she briefly danced with Oakland Ballet. Afterward, she obtained a master’s degree in journalism from Northwestern. She reported political stories on Capitol Hill. She’s a member of the bar in three states (and still trains at the barre.)

“Dance students who become doctors or lawyers do very well because dance teaches discipline,” said Kurt Putzig, a teacher at Miller’s studio for more than 20 years, who is now chief carpenter at the Kravis Center. “We didn’t just teach steps, we taught self respect, perseverance and how to meet challenges.”

After stints in the Palm Beach County State Attorney’s office and the West Palm Beach office of the huge Greenberg Traurig law firm, Kranz had just opened her own personal injury law firm in Palm Beach and Miami Dade counties when she learned Miss Joan was in trouble.

The teacher who instilled the work ethic that made Kranz a dedicated lawyer, was warehoused in a nursing home with Alzheimer’s, wearing an ankle monitor. Miss Joan, who dedicated her life to perfecting the art of movement, was encouraged to stay in bed.

Kranz obtained power of attorney so she could make decisions about Miller’s welfare.

“Carissa is very sensitive to other people’s needs,” said her mother, Carla Lewis, who lives near her daughter in Jupiter and worries about her daughter’s selflessness. “She’s got a lot of compassion.”

Kranz learned how to negotiate the legal and medical bureaucracies. She got Miller enrolled in a Medicaid program that would help pay for caregivers and medical supplies. She found Tequesta Terrace, a nearby assisted living facility with an Alzheimer’s wing that “would be perfect for Miss Joan,” but couldn’t afford the $3,500 to $5,000 monthly fees.

So, she set up the website palmbeachballetcenter.com and established a trust account, confident that many of the thousands of students Miss Joan trained and the dozens of Palm Beach society matrons for whom Miller’s dancers performed, would contribute.

Against her mother’s advice, Kranz turned her home office into a spare bedroom for her former teacher. She learned to bathe her former teacher and change adult diapers while keeping track of Miller’s volatile moods. Kranz works from home as much as she can, and goes to her Miami office when — sometimes if — caregivers show up.

“To see the difference between who Miss Joan was and who she is now is just so sad,” said Debbie Fernandez, a Jupiter resident and former Miller student who danced with the Washington Ballet in the 1970s. “What Carissa is doing is so admirable. I know it’s going to get even harder for her.”

‘A blessing for Miss Joan’

For almost a year, Kranz has spent her nights and weekends watching TV with Miss Joan, changing her sheets, motivating her to take walks and twice a week, taking her to an evening dance class at Jupiter Community Center, where Kranz’ mother teaches ballet.

There, Miller will sometimes go through the motions of a barre class. Occasionally, she reverts to teaching mode and offers students corrections. Other times, Kranz says she doesn’t seem to know where she is.

“The disease is a blessing for Miss Joan, in some ways,” Kranz said. “If she knew what had happened to the studio, to her life, she’d be suicidal.”

Lewis admires her daughter’s charitable impulse, but wishes she would regain her own life.

“Carissa’s so young. As a mother, I want her to think of herself, but she really doesn’t,” said Lewis. “She’s become a caregiver 24/7 without a break.”

Kranz feels she didn’t have a choice.

“Miss Joan paid it forward by giving me a lot growing up, for free,” said Kranz. “She helped mold me into the person I am today. I felt this was my payback to her.”

For Miss Joan Miller, dance was her whole life, her only life.

No one recalls boyfriends or even friends outside the dance world.

She started lessons at Thomas Dance Studio in Lake Worth at age 9, then marched for Lake Worth High School as a majorette.

She had a high school boyfriend, she once told Kranz, but he broke up with her for her best friend. She has never mentioned another beau.

In the mid- 1950s, she danced for the Metropolitan Opera Ballet and in a revival of the musical “Carousel” with John Raitt. She told The Dance Magazine of Florida that her mother’s illness brought her home in 1958. She cared for both her parents until they died.

She began teaching at an existing studio in Lake Park and performing with the Ballet Guild of Palm Beach, before taking over the studio in 1961.

As Palm Beach Ballet Center became known throughout Southeast Florida, her students were invited to dance in a Super Bowl, for Pope John Paul II’s visit to Miami, during a visit to Santo Domingo and for nearly two decades, Herme de Wyman Miro’s International Society of Palm Beach gala.

“The way she carried herself, you would think she was a Palm Beacher,” said Lewis. “She performed at a lot of charity functions in Palm Beach and fit right in.”

Kranz pieced together what had happened as Miller went from confused to forgetful to incapacitated.

She lost Palm Beach Ballet Center in 2013 after forgetting to pay the rent. She had borrowed against her house so often to keep the studio going that her home was in foreclosure. Almost her only asset was a $1,500-a-month Social Security check.

“There was times I would tell Miss Joan to think about retirement, but she never thought about that at all. Quite a few people tried to advise her, but she didn’t know how to do things to take care of herself,” said Putzig.

An only child, Miller never married and had no children.

“Her students were her family,” said John Koterba, whose Lighting Video company videotaped Palm Beach Ballet Center’s shows for more than 20 years. “I’m shocked that her students haven’t come forward to help a little more. I would think that of the thousands of students she had there should be some more help coming from somewhere.”

But so far, it’s mostly just Kranz, with a little help from two or three former students.

Back in Kranz’ airy white apartment, the student tries to nudge her former teacher to do a little ballet. Miller hardly moves. Then suddenly, she barks out a combination for the ballerina before her: Glissade, jeté, pas de bourrée.

Kranz dances through the positions and Miss Joan beams.

A student, her star, was dancing for her again, performing in ways she never dreamed.

This article was featured in The Palm Beach Post.